Sunday August 13th the Welsh Juniors take on favourites, Yorkshire in one of the semi final matches. The Home side played at Craig-y-Don Bowling Club and the Away squad visited Kirkheaton Cricket and Bowling Club. The Referee was Graham Pickavance ( Lancashire) who was assisted by Alan Davies and Arthur Peake. Deputy President of the British Crown Green, Keith Andrews also attended as did the Yorkshire President Keith Hatzer.

This was always going to be a mountain to climb for Wales, but they gave it their best shot on the day. Harry Lawton (Rhos Park) at number 5, had quite a battle with Alex Edmondson but gained the first win for Wales at Home with a 21-16. Nia Jones (Coed Talon) proved to be a worthy member of the squad with a 21-13 win from the bottom half of the line up. Nia was also awarded the Player of the Match trophy. Final score at Home was Wales 154 – Yorkshire 239.

Notable successes at the Away venue were Matty Worden (Gresford Colliery) who got the team off to a flying start with a 21-7 win and Mathew Stevens (Johnstown) 21-13. Mathew was awarded the Player of the Match for Wales at the away venue. Wales had to wait until the final four to pull successive victories – Joe Hayes (Cunliffe) 21-16, Elliot Hall (Garden Village) 21-12, Away Captain Ieuan Pugh (Esclusham) 21-5 and two times Junior Welsh Merit Champion Sam Williams (Cunliffe) 21-19. Final score here was Wales 215 – Yorkshire 198. The win away salvaged some pride for the Welsh squad as Yorkshire greens are not the easiest to master.

This may be the end of the road for this season but what a journey these young players have had. From losing a strong six or seven players, due to age ineligibility, all four selectors have worked tirelessly to forge a new squad. Wales still has a few 'veteran' players who have proved valuable as role models and mentors to new players throughout the season. I would venture to say that Wales have a winning team in the making. There is certainly a belief among the Junior squad that success is achievable. With continued dedication from the players and selectors and support 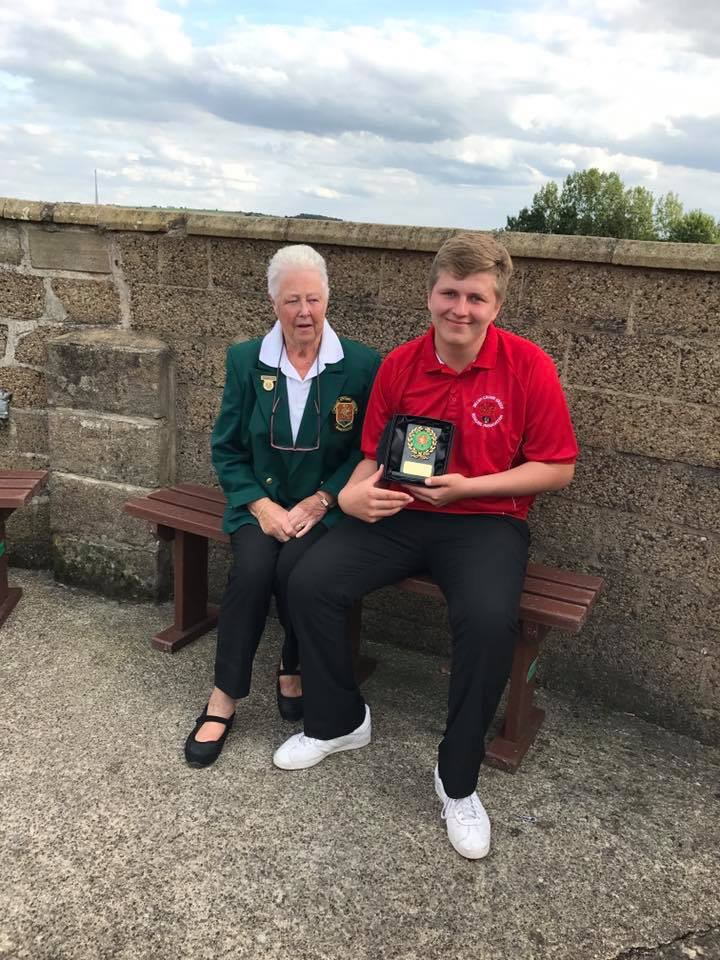 Wales Juniors came through in spectacular fashion in their third round game of the Drakes Pride Junior County Championship against South Yorkshire on Sunday 9th July at the Home venue – the Oval Bowling Club, Llandudno and Away at Meersbrook Park Bowling Club.

WCGBA President, Danuta Price hosted the day with other officials of the WCGBA. The Referee on the day was Fred Huxley (Cheshire) assisted by Derek Evans and Alan Davies.

There were a few changes to the line up with young Daniel Owen (Beaumaris) stepping in from the reserves at the Home venue and Jess Lacey (Esclusham) at the Away. Also making her debut for Wales was Nia Jones (Coed Talon).

At Home,Wales had comfortable victories with the first four blocks with a resounding 21-7 win for Harry Lawton (Rhos Park). Nia, playing at number eight came away with an impressive 21-5 win and James Todd (Conwy) rounding off the afternoons' play at number twelve triumphed at 21-4. At Home, Wales scored 224 to South Yorkshire 158. Player of the match was Harry Lawton.

At the Away venue the overall score was tied at 213 for Wales and South Yorkshire. Notable performances included Oliver Jones (Johnstown) win of 21-6 and Ieuan Pugh (Esclusham) 21-10. Mention must be made of young Jess Lacey playing her first game for Wales just going down 21-20.

This performance puts Wales Juniors in the Semi Final of the championship which will be played on 13 August.

There were 30 entries on the day with competitors from right across North Wales. Some were seasoned players and others entering for the first time.

In the first round there were some stunning wins by Mathew Stephenson,( Johnstown BC) Mathew Worden (Gresford Colliery), Sam Williams (Cunliffe), Nathan Lacey (Esclusham), Nia Jones (Coed Talon), Joe Hayes (Cunliffe), and Ryan P Williams (Penmaenmawr). The toughest games from round one were between Harry Lawton, (Rhos Park) and Callum Sorfleet (Bethesda), with Callum winning out at 21-15, and Ieuan Pugh (Esclusham) against Ben Hewitt (Abergele). Ieuan gaining victory 21-19.

In round two, Ieuan met Sam Williams to battle for a place in the quarter finals. Both lads have won this trophy in the past – Ieuan in 2015 and Sam 2016. They kept the points close for the first part of the game, but Sam was not to be denied a place in the quarter final, beating Ieuan eventually to 21-15. Nathan Lacey gave a spirited performance also in round two where he played some excellent bowls to hold Tom Jones (Nercwys) to account. Tom won eventually 21-19. There were credible performances also from Mathew Hewitt (Abergele), Jake Barlow( Garden Village), Keiron Hallet (Llay), Joe Hayes. James Todd (Conway) and Ryan P Williams had a superb game. Neither player deserved to lose, but James nudged ahead to secure a place in the quarter final with a 21- 19 win.

In the quarter finals, Joe Langford (Esclusham) and James Todd had a tight and difficult game with James reaching double figures first. It was nail biting to watch, with both players edging point for point all the way. James eventually won 21-19. In the semi final, Sam Williams took a commanding lead 11-1 against Mathew Worden ( Gresford Colliery) and won 21-13. James Todd was better matched with Keiron Hallett but won to 21-14.

If the day was hot, things were about to get even hotter. The final featured Sam Williams – his third appearance in the final of this competition – and James Todd. Both players were neck and neck at the start of the game with Sam breaking the double figures goal first 10-7. This was a really tough match and they eventually reached 19 across. By this time, the spectators were on the edge of their seats. At 19-19 across, James signals two- surely the title was his. Sam, however, showed incredible calm to ask for a measure – it was 20-19 to James. You could hear a pin drop when they bowled out for the next end. Sam secured one point. It was twenty across. He then bowled a six inch wood in front of the jack. James bowled out, but was just short. Sam made no mistake to place his second bowl short but on the land. James struck, but missed by a whisker. Sam secured his second title 21-20.

Unfortunately Sam will be unavailable to take his place for Wales at the British Junior Merit Final in August due to family commitments. His place will be taken by Mathew Worden. James has earned his place there too.

An extra to the day, was young Nia Jones (Coed Talon) who played well in her two games, and secured a place in the British Junior Ladies Final. She was presented with the Ken Hardman Cup by Deputy President Brenda Jones. 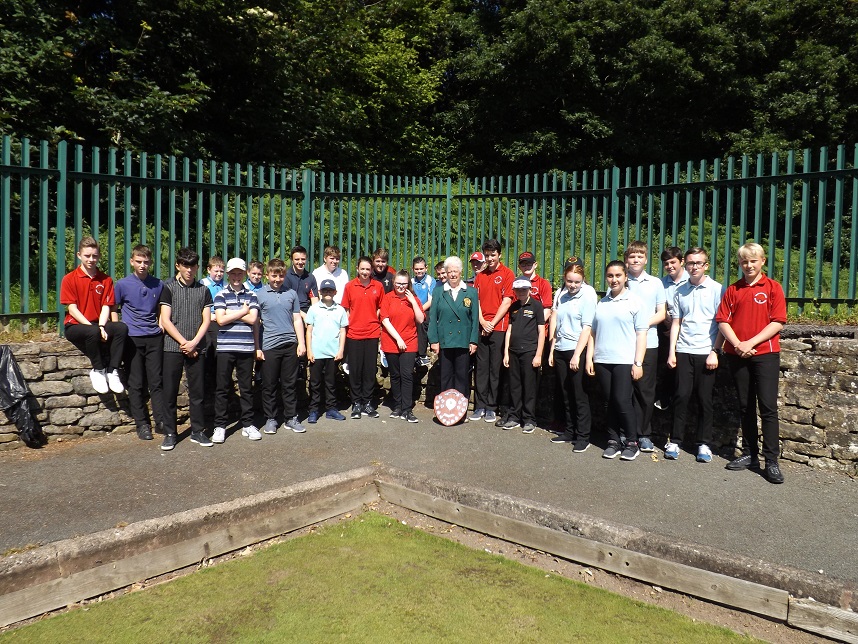 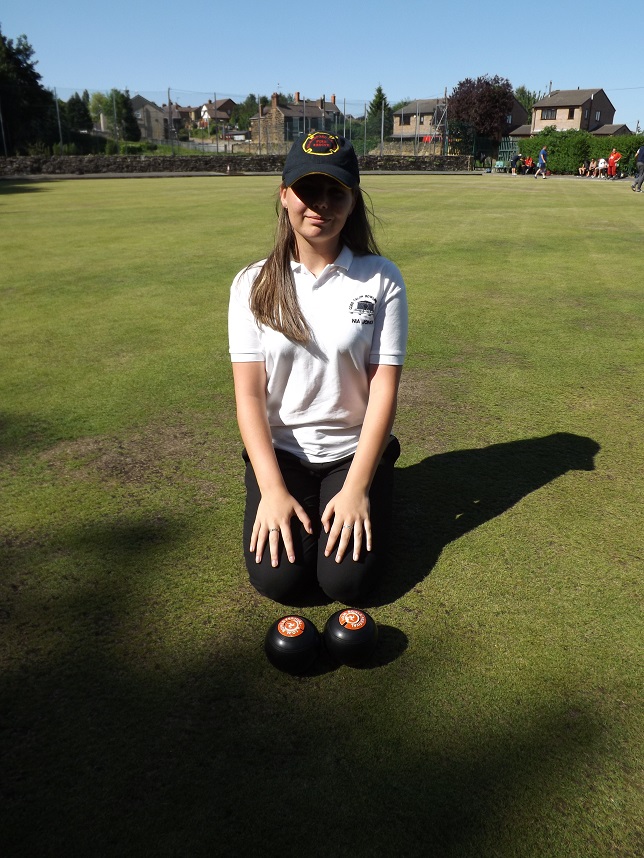 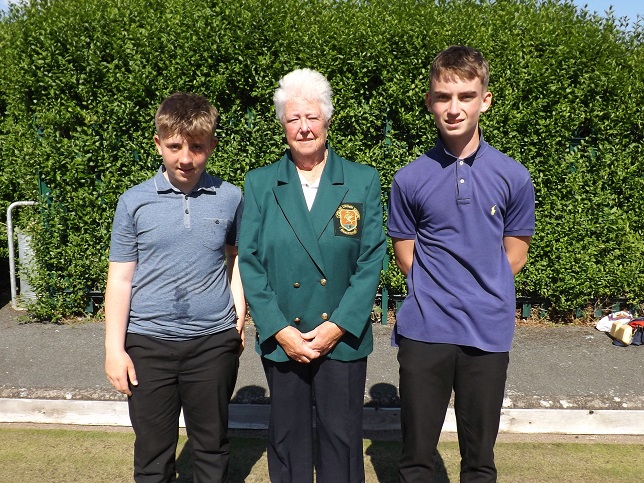 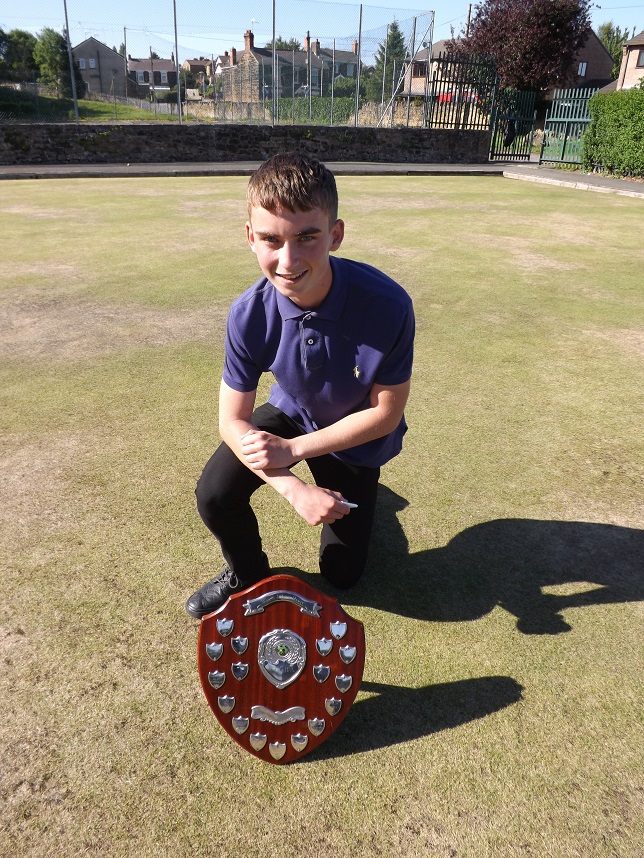 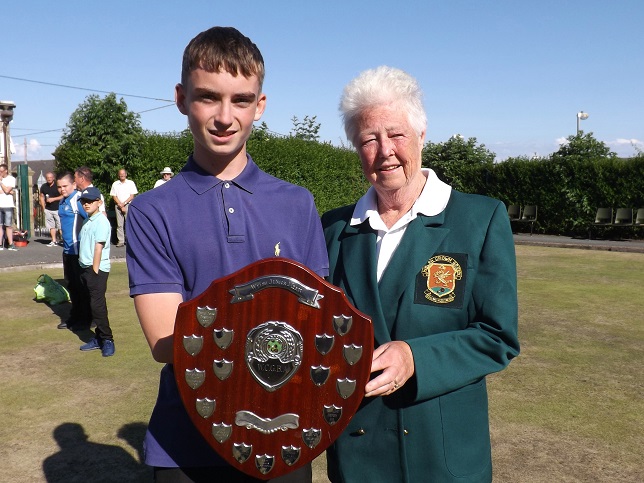 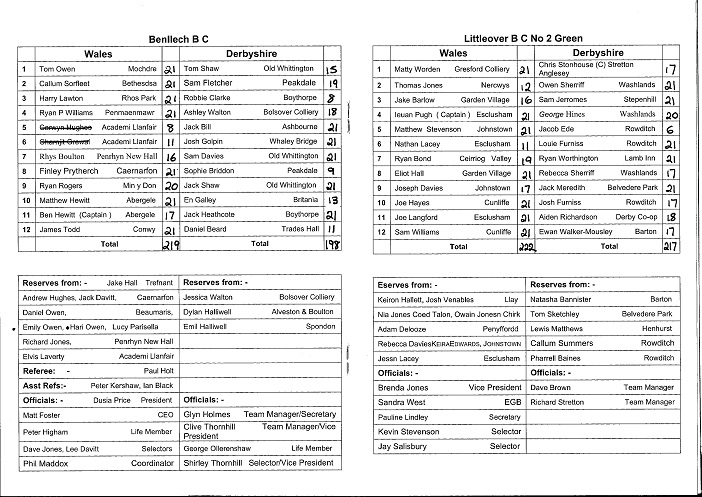 The second game in the Junior County Championship was held on Sunday 11th June at Benllech BC for the home team and Littleover BC, Derby for the away squad.

President, Dusia Price was among the officials on the day. The Referee was Paul Holt from Greater Manchester, and he was ably assisted by Wales' Peter Kershaw and Ian Black

At the home venue, in 'breezy' conditions, birthday boy Harry Lawton( Rhos Park ),led the way with a commanding victory 21-8. Harry was sixteen on the Sunday and was presented with a birthday cake before the match. The first four for Wales all came through with wins despite a few scary moments for Callum Sorfleet ( Bethesda ), Ryan Williams (Penmaenmawr), and Tom Owen ( Mochdre ) with scores 21-19, 21 – 18 and 21-15 respectively. At one point Callum was 17-9 down but with encouragement from the crowd and sheer determination on his part he came through to win. In the second four Finley Prytherch played a strong game to win 21-9. Subs. Hari Owen and Emily Owen stepped in at games 5 and 6 respectively.

There was a good crowd at Benllech ,and to echo the words of Selector Dave Jones, the parents, grandparents, uncles and aunts should be applauded as much as the young players for their input. Together Welsh Junior bowls has a great future

For the away team, there were some excellent results. Mathew Stevenson ( Johnstown ) winning 21-6 is one to be noted. Other scores were close, but victories none the less.

Next, Wales meet Yorkshire in their third game. This will be a tough one but we can do it 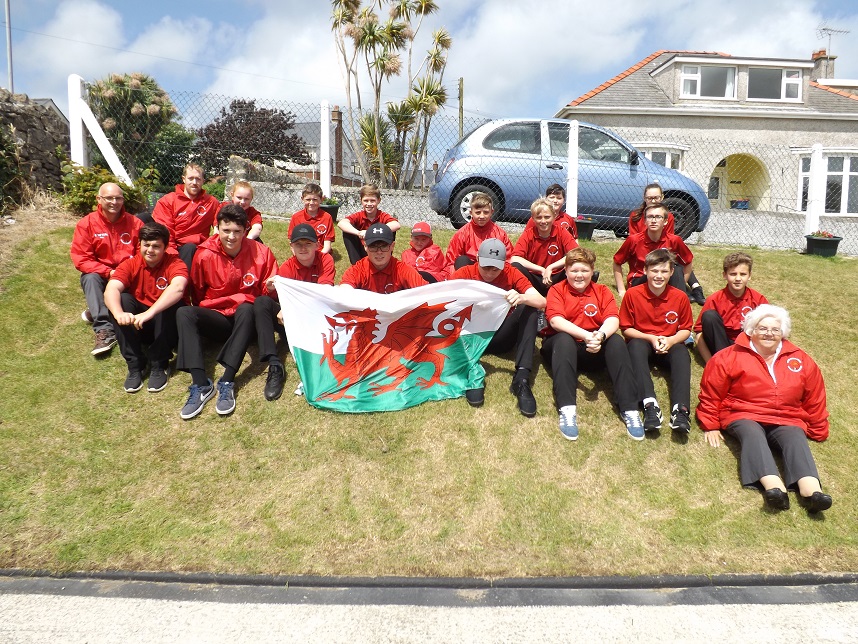 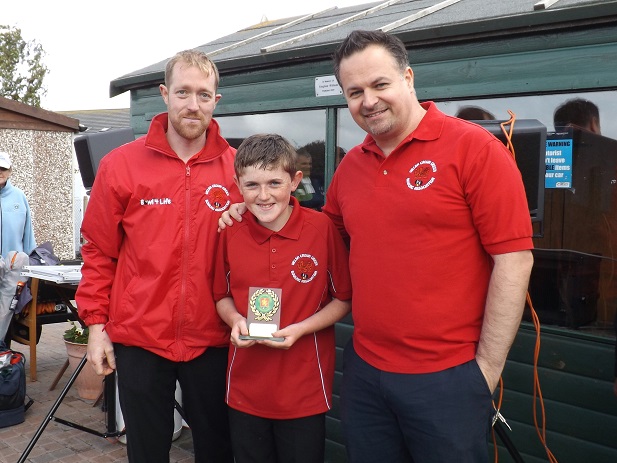 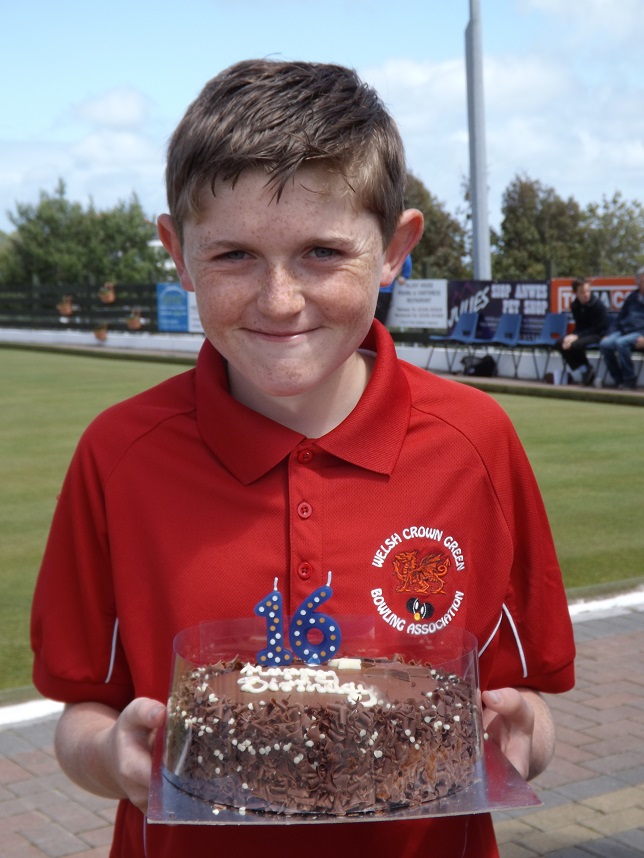 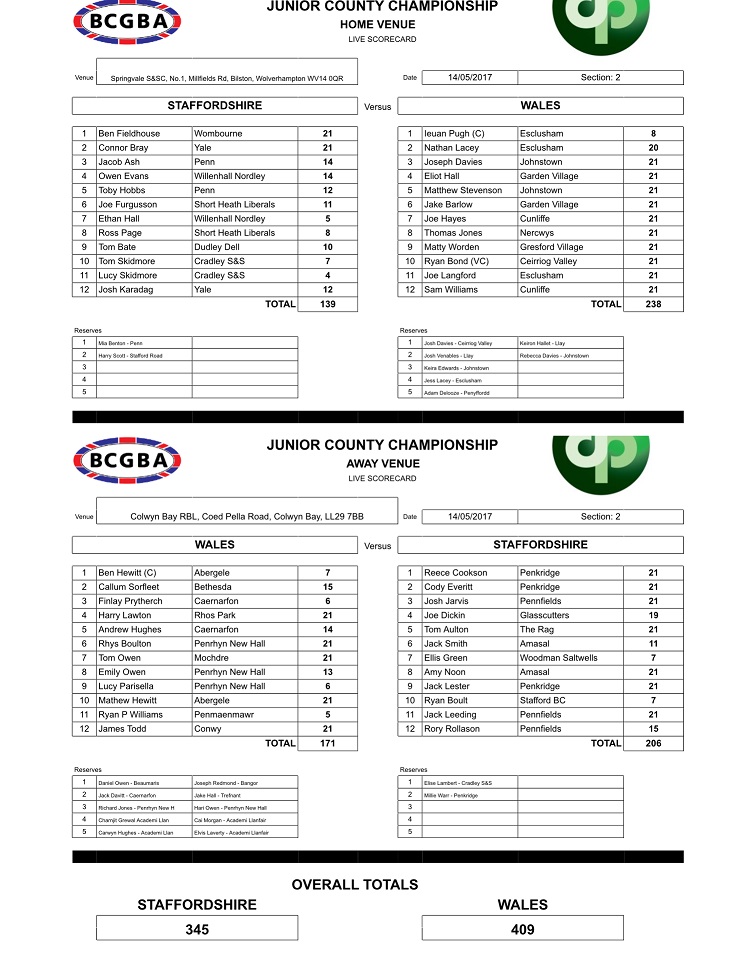 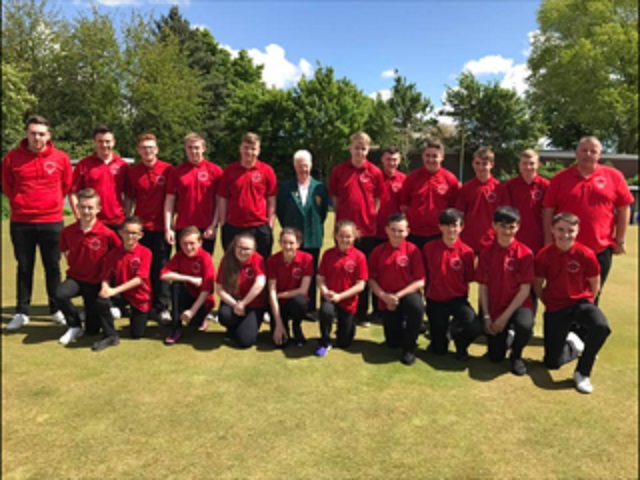 Phil Maddox has been appointed as Junior Co-ordinator for the 2017 season. Phil was keen to get involved and see the position filled. A former Junior player himself, Phil plays his bowls at Broughton & Bretton Bowling Club in Flintshire. Can current and future Junior players and / or their parents please ensure that Phil has your contact details for the forthcoming season. You can either send Phil a FB message or email: philmaddox@live.co.uk or mobile: 07760 280251.